The Comedy Playhouse and School (website, Facebook) in Tucson, Arizona is the latest company to produce You’ve Ruined a Perfectly Good Mystery! Performance times and ticket information are at https://www.thecomedyplayhouse.com/current-production.

Posted by Christian Neuhaus on August 5, 2017 in Performances

San Antonio’s Rose Theatre Company (website, Facebook) is the next company to produce You’ve Ruined a Perfectly Good Mystery! In a story in the San Antonio Express-News (‘You’ve Ruined a Perfectly Good Mystery’ gets SA debut), Rose co-owner Chris Manley, who is also in the cast, said “Whenever I produce a show, I’m in the mindset of, ‘I want to do a show I want to see.’ This is something I want to see.” The production is directed by Matthew Byron Cassi and will apply the fight choreography experience of cast members Joseph Travis Urick (The Detective) and Morgan Clyde (The Narrator) to showcase more combat than the previous productions.

Below is the poster for the Rose production and a photo taken by Erin Polewski that accompanies the Express-News story. The Facebook event is here. 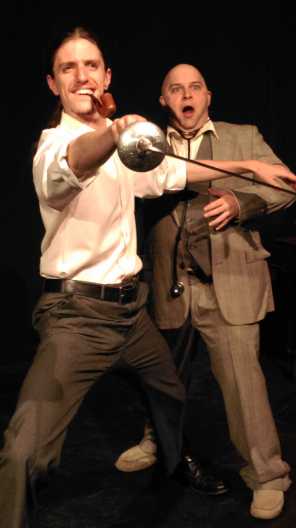 This is the first production of Ruined to take place after the “Free Sherlock” legal decision that ruled Sherlock Holmes and Dr. Watson are characters in the public domain. That decision means we don’t have to be concerned about referring to Sherlock Holmes in descriptions of the play. It also means that there is a diminished imperative for referring to the investigators as only The Detective and The Doctor. Nonetheless we won’t be rewriting the play to give the characters their “true” names, as that would be, well, less funny.

Posted by Christian Neuhaus on March 28, 2015 in Performances